Here is the result of the day in the workshop. 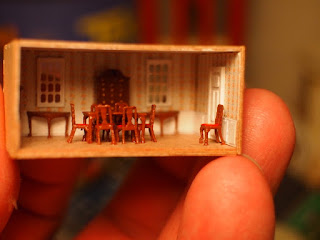 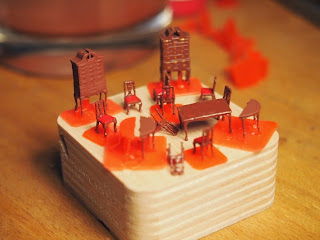 Alone at home :-) Lots of time to spend in the workshop.

When writing this post the printer is printig some windows and doors and when that print is finished a fireplace is prepared. Especially I look forward to see if the windows will print properly. (Two hours from now)

Paint used is Vallejo Model Color. The very first paintjob was done with Humbrol Acrylic. The Vallejo paint is far the best.

I have just tried to paint one of the small chairs.
Paint is not what I like most but learned a few things about painting small. The paint should be thinned very much for example. And stereo vision is also a good thing. The painting was done looking through a one-eyed watchmakers loupe. 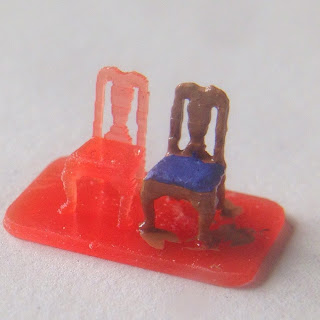 The next set of chairs will be printed on small pillars for easy removal from the baseplate.
I have plans and drawings for furniture to be used in a small roombox. The coming weekend is dedicated to small prints.

PS: Photo was taken with a smartphone and the watchmakers loupe.
Posted by niels at 5:42 AM 1 comment:

At last. The printer is finished and the first print is made. 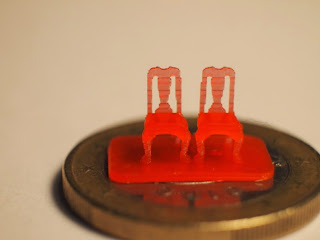 The coin is a 1-euro

And the finished printer is here. 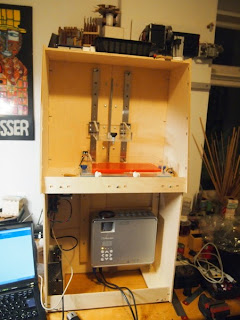 Next is to learn about all the parameters of the slicing and control software.

The required chemicals has arrived.

Right two bottles is silicone for the VAT-bottom and the right bottle is the light sensitive resin to make models from. 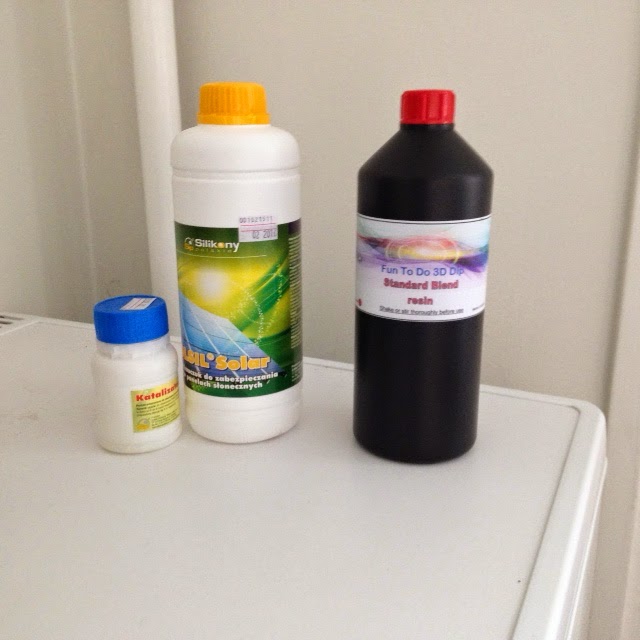 The VAT was coated today. Now it has to cure for 48hours on a flat surface. If everything goes straight I can try first printing at the end of the week :-) 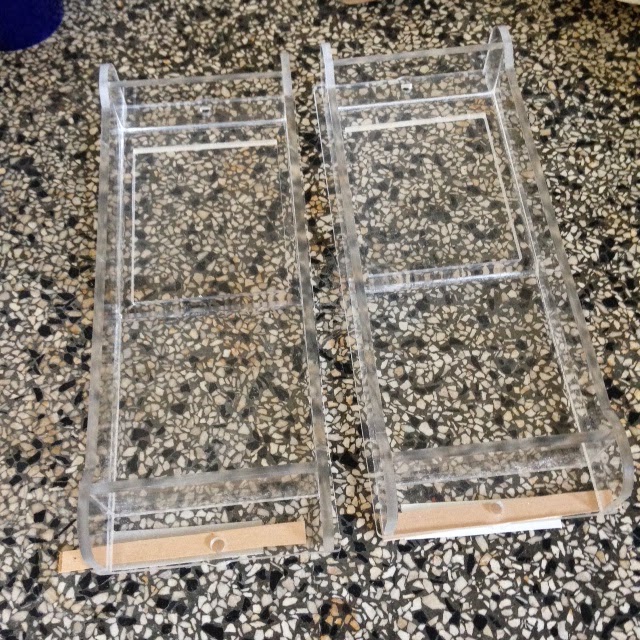 Coated VAT, Hard to see but the bottom has a very thin layer of silicone.

For holding the VAT to the sliding table I was in need for two thumbscrews. The local hardware store didn't have any in the right size! What to do then?

Simple design was done in Sketchup and then 3D-printed. 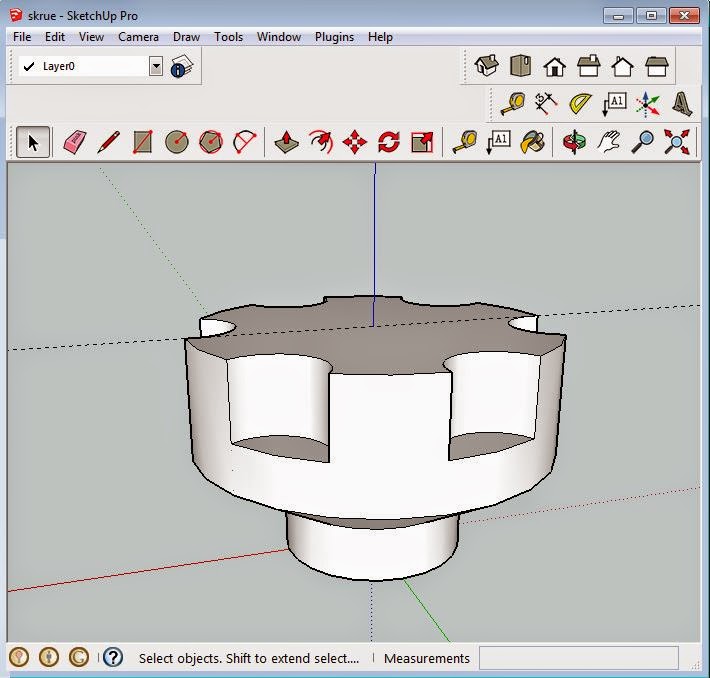 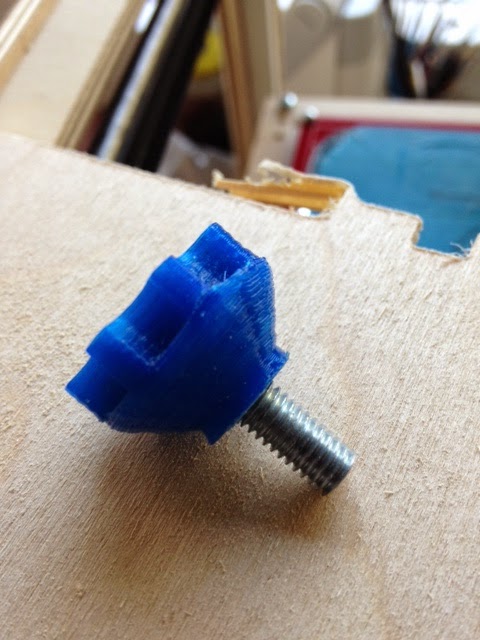 The lower case is finished and the projector mounted on a baseplate. The projector will be moved up and down depending on some of the printing parameters. Position will be locked by placing dowels in the rails. A screw for moving was considered, maybe in the next version 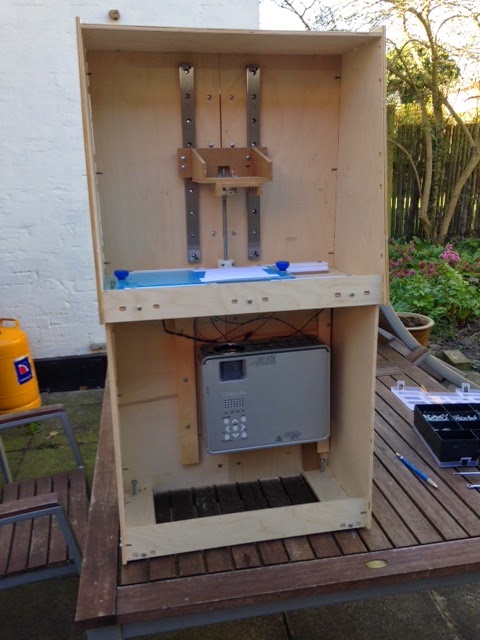 For testing measurements I made the build platform from MDF a cheap material to use for testing how all the parts fit together. A new made of plexiglas is on the workbench ready to replace the MDF-version.

What remains now? The easy part, namely wiring the electronics, configuration of software and testing operation without photosensitive resin.

Yesterday a new garden door came and the carpenter will mount tomorrow. 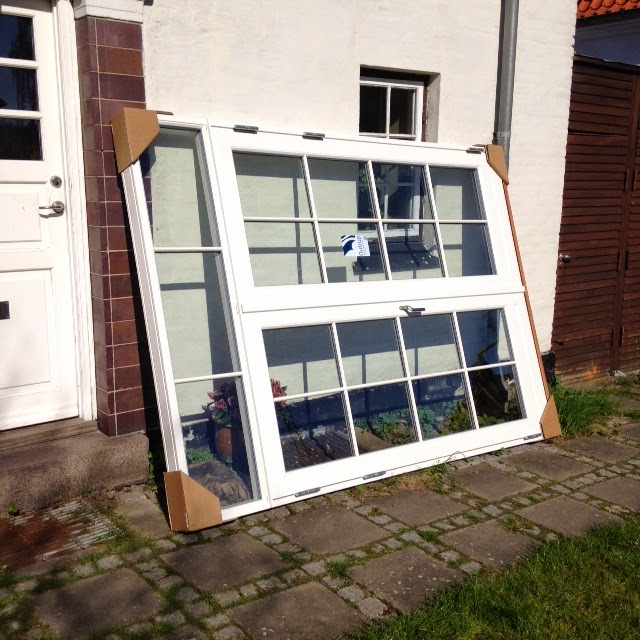 This is the old garden-door. Hopefully the new door will bring a little more light into our dining room. 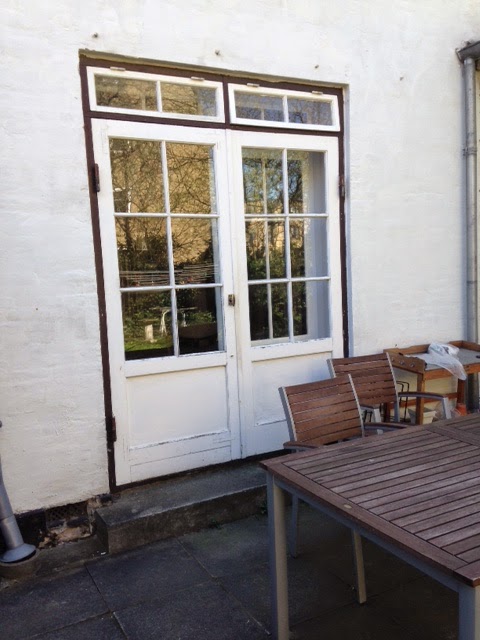 A little progress on the SLA 3d-printer. I didn't get much time in the workshop during the Easterholidays :-)

First was testing the slide mechanism. Since this photo wast taken I replaced the wooden rails with rails made from plastic because of lower friction. 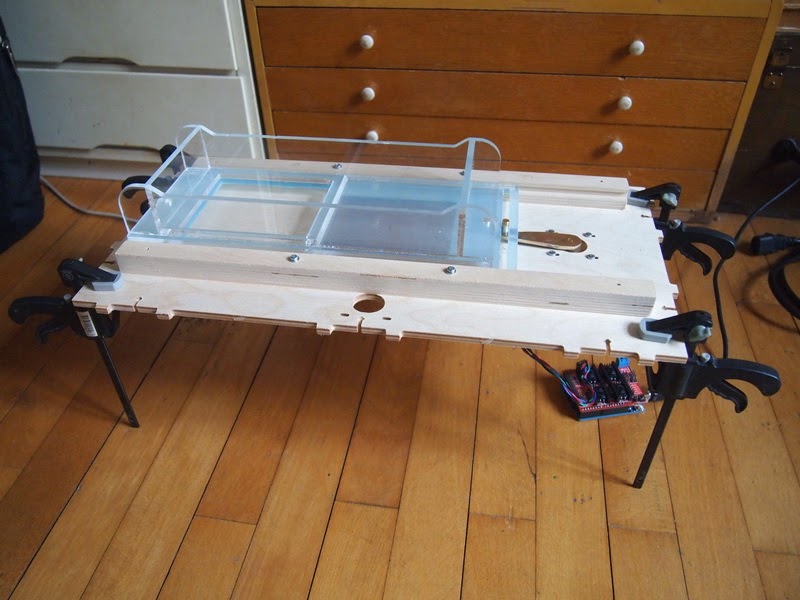 Then the upper case was assembled and rails for z-movement (up-down) mounted. 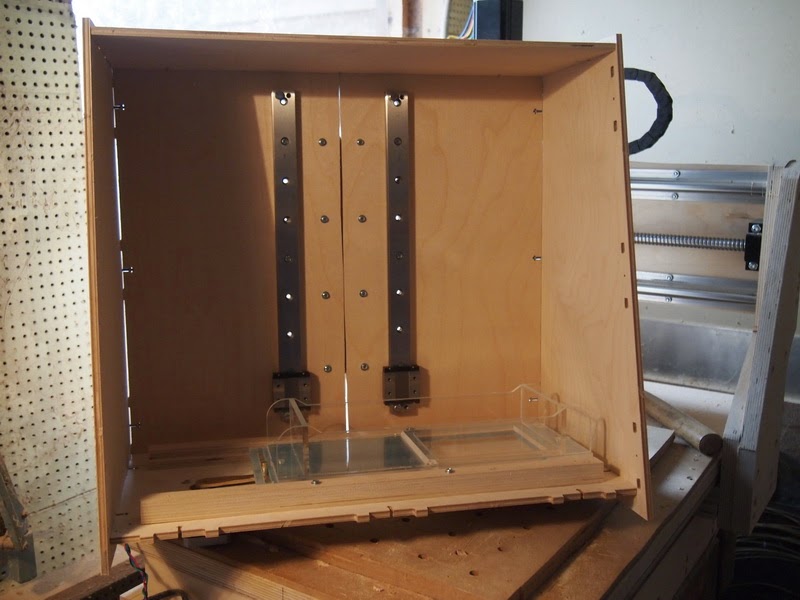 To get measurements for the lower case that contains the projector a mockup was setup on the dining table. 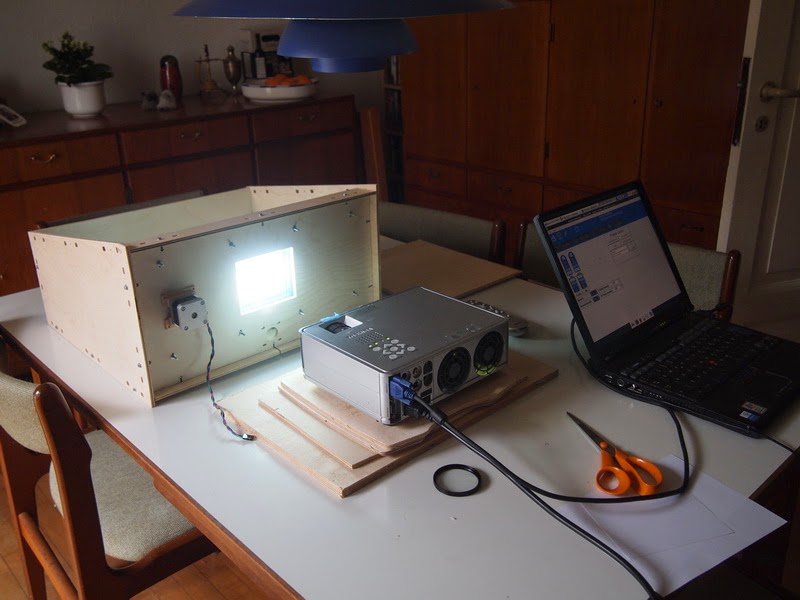 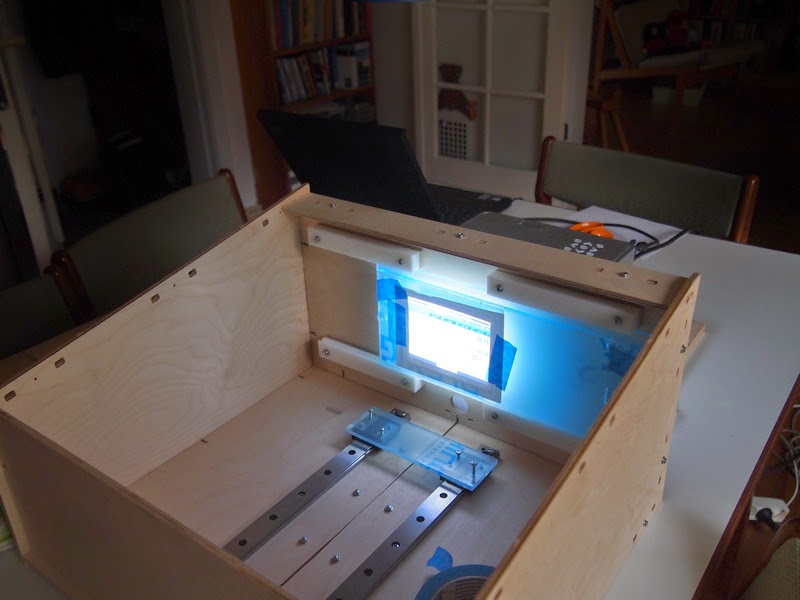 In normal use of the projector is meant for projecting a large image on a wall or screen and that gives a too large image so something must be done. Either modify the projector so it can focus at the close distance that requires opening the projector and removing stops in the lens. I didn't like to do that. So instead I chose to try using my set of close-up lenses. 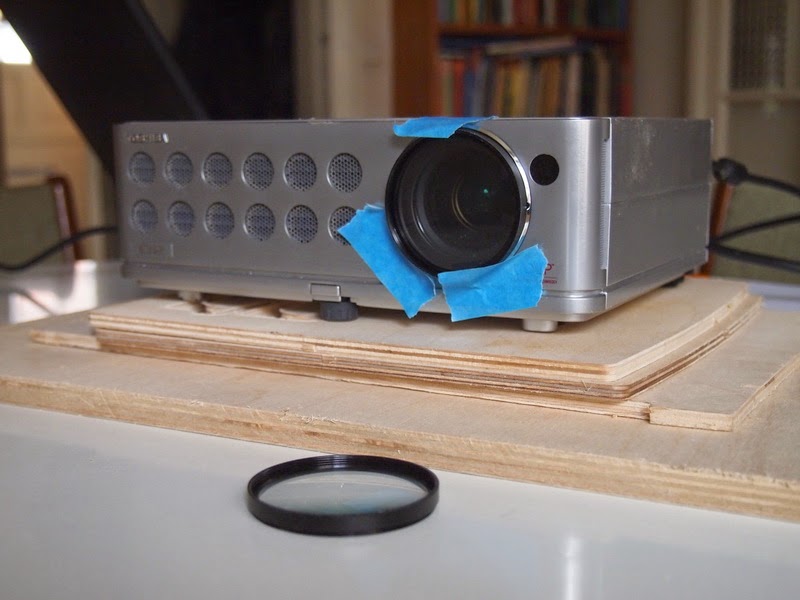 Back to the drawing board designing the lower box.

Technique fascinates me :-) I was unsure if I should make a new blog about this project but then decided to keep this one because the end-product will be miniatures.

During the last years I have made a few 3D-printers. Some better than others but I learned a lot.

The last 3d-printer was made during november 2014. It was an Ultimaker classic and actually that printer was better than all the other designs I previously had built. It is reliable. It make nice prints. Why didn't I make the Ultimaker from the beginning? Well, because my cnc was too small for cutting the panels. After having made a few modifications to the cnc it was possible to cut the ultimaker panels.. 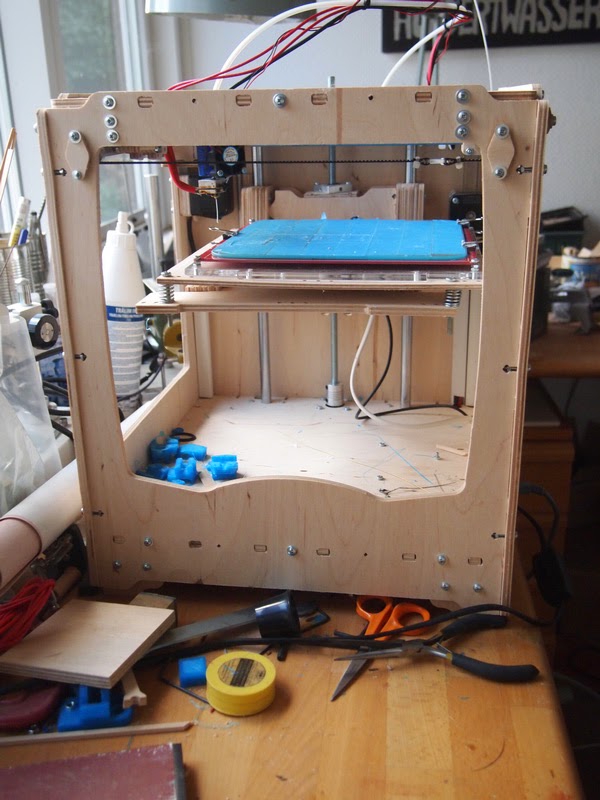 When I need a print I just power up the printer and start printing. I have not used the printer for making miniatures, but for making parts for other projects. 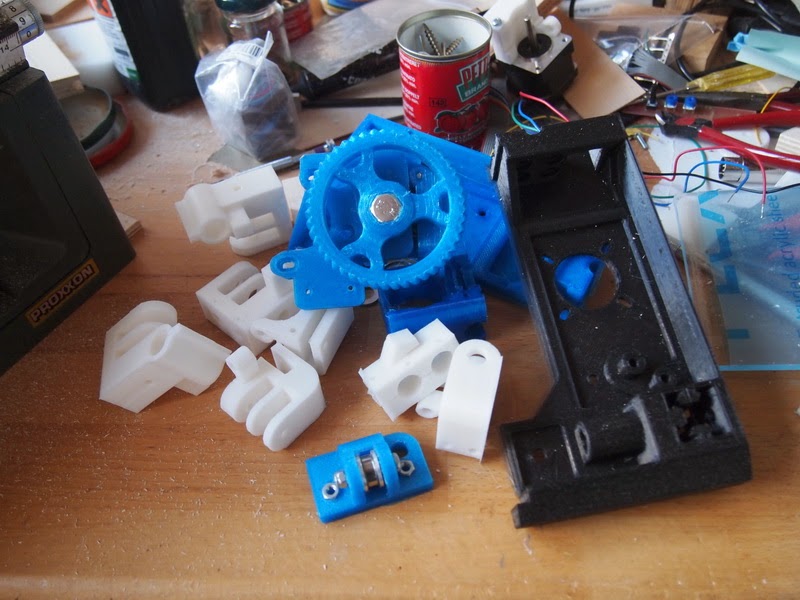 Well, I tried once printing a 1:24 Queen Anne chair but as the photo show the finish is not good enough for miniatures (as expected). Looking forward to print the same chair in scale 1:144. 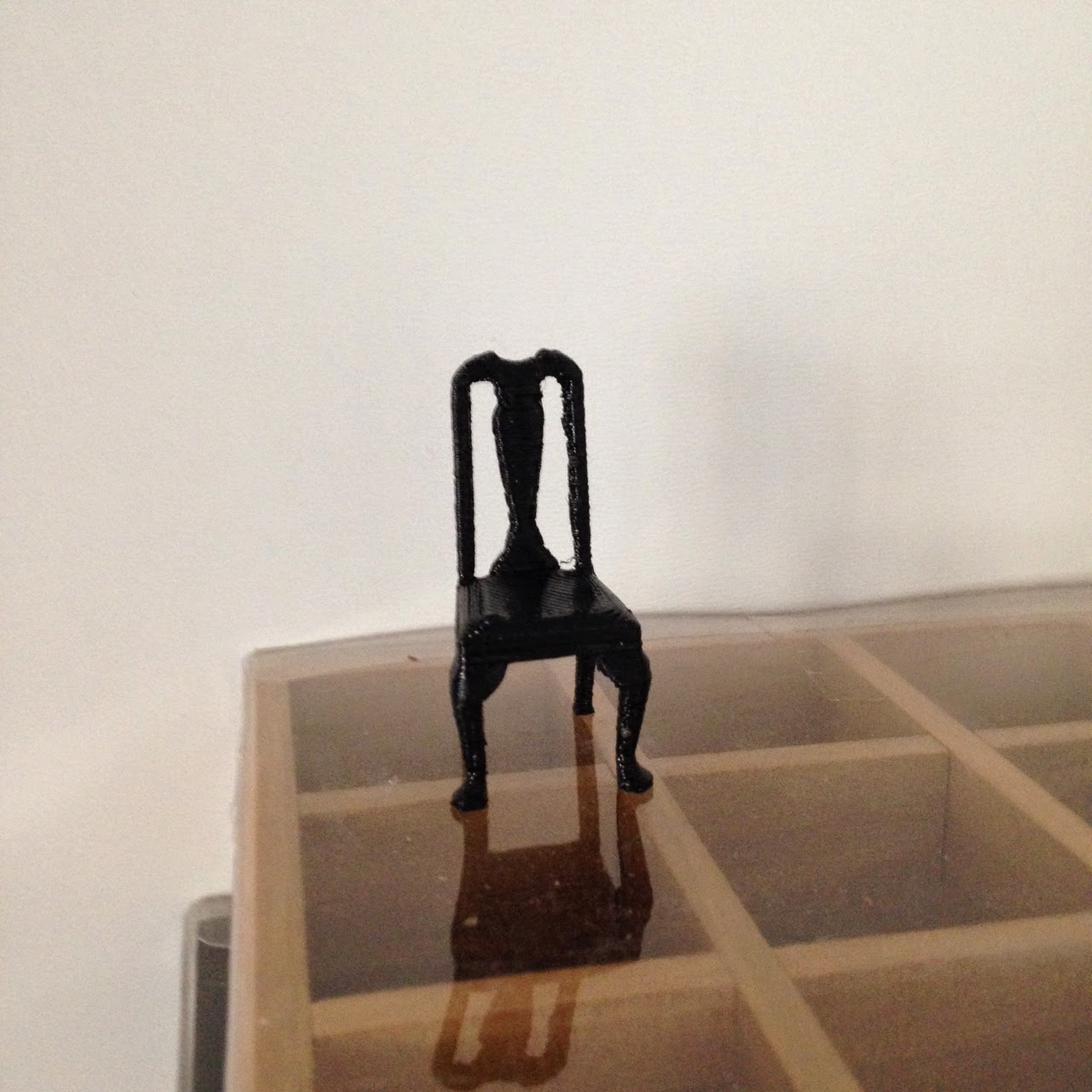 So, What next? Answer is SLA (Stereo Lithography Apparatus)

During the recent years the materials for SLA has been better and cheaper and easier to get.
One of the SLA techniques is based on a liquid resin that cures (hardens) when illuminated by ultraviolet (UV) light. The UV-light can be from a special lowpower laser or from a standard homebio projector.

The SLA printer then works as follows.

The 3d-drawing is sliced in very thin layers (f.ex. 0.01mm) Every single layer is then projected on a thin layer of resin. When the resin is cured the printer moves 0.01mm up and the next layer is illuminated and cured. and so on...

I found a cheap used projector with few hours on the lamp. 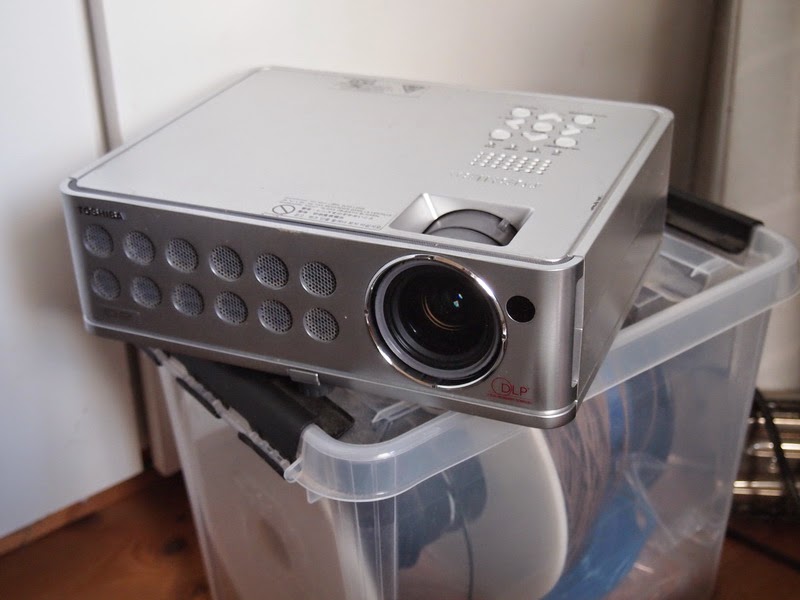 Next was to decide how to build the printer. A few hours browsing the net I decided to build something like the B9Creator. 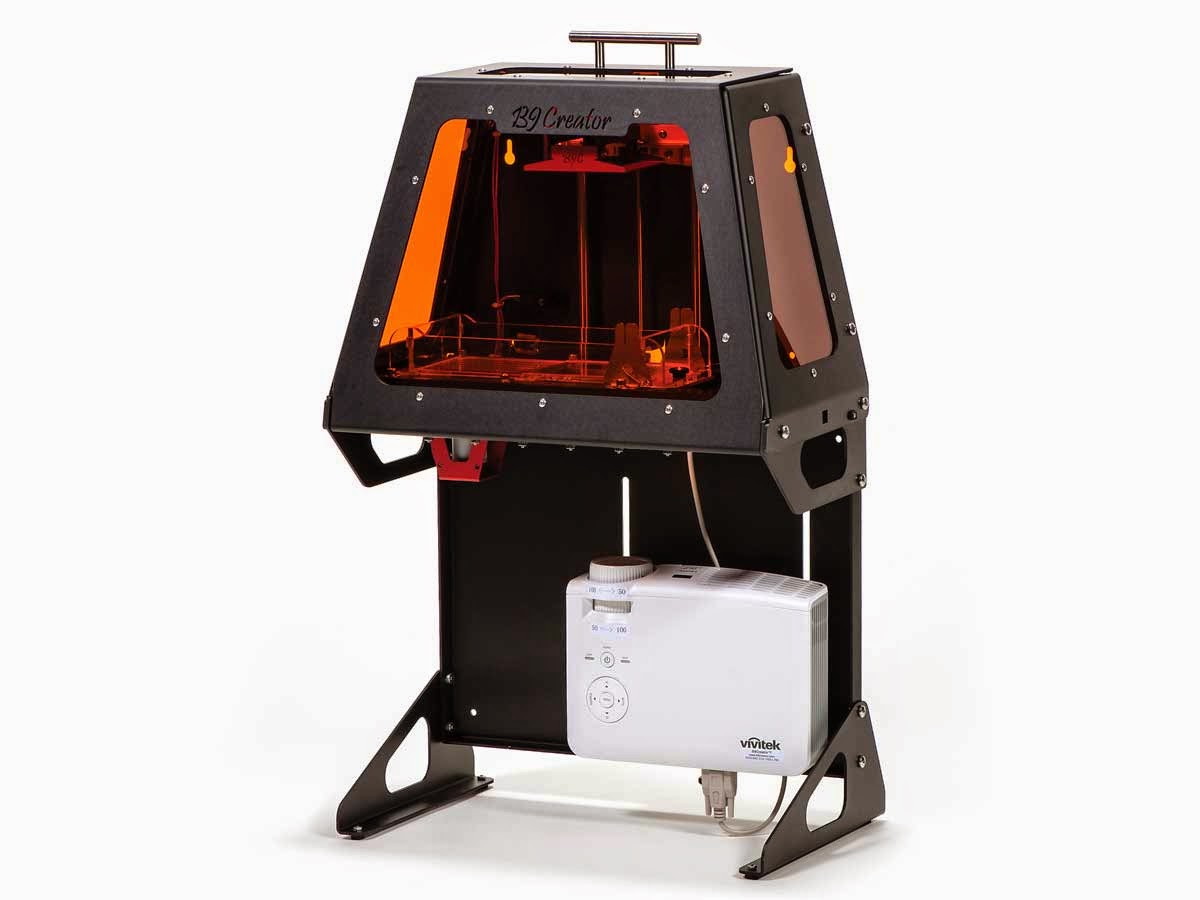 My design is mostly based on materials I have in my junkbox except for the 6mm birch-plywood.

I was happy with the Ultimaker way of assembling sheets of plywood so based on the open source drawings and plans for the B9Creator I made drawings to be cut on my CNC-machine. 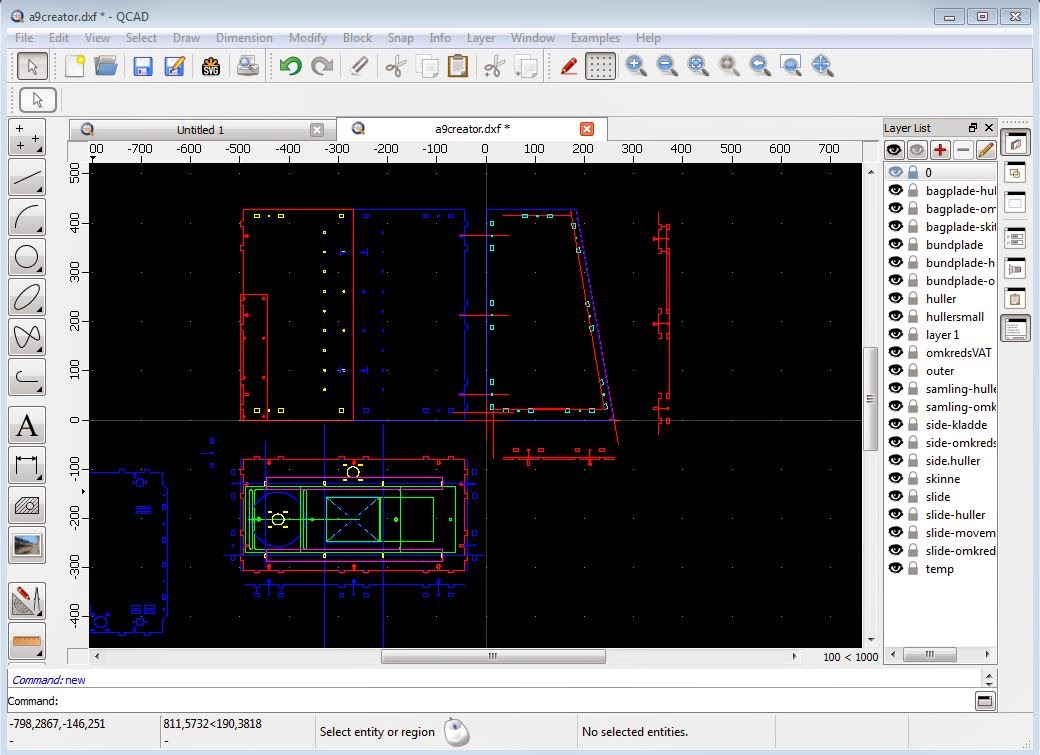 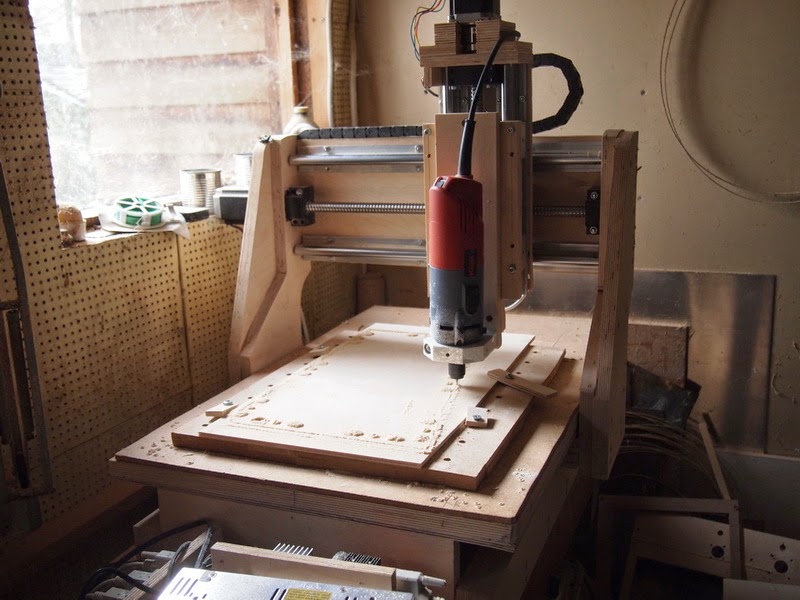 Some of the panels are split in two because the cnc is too small :-) 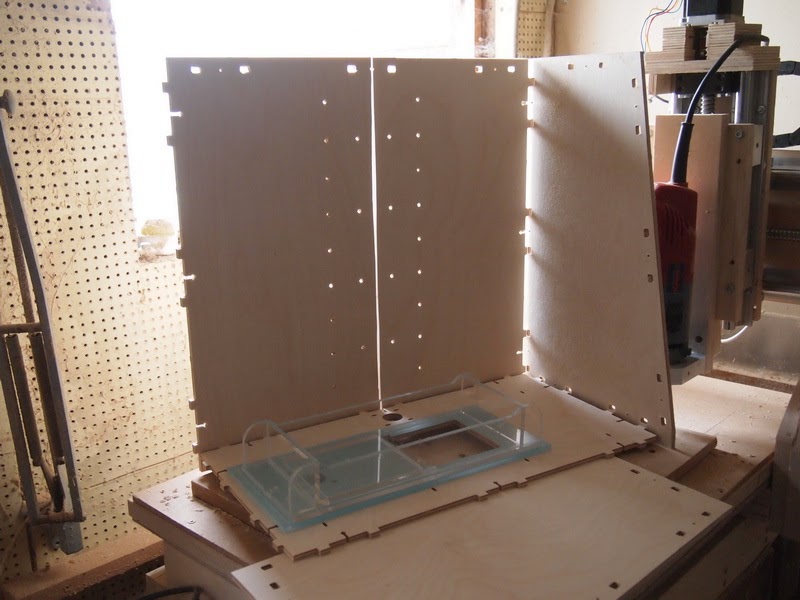 Dry assembly of the panels.

An essential part of the printer is called the VAT (I don't know what it stands for but it's not Value Added Tax) The VAT contains the uncured resin.
The plate that holds the object(s) to be printed is lowered into the resin leaving a small cavity between the VAT-bottom and the buildplate (0.01mm high). When the resin is cured the VAT slides away to release the object from the VAT-bottom. The VAT-bottom is covered with a silicone layer that prevents the cured resin to stick to the bottom, The sliding action is a way to overcome the adhesion between the build and the bottom. 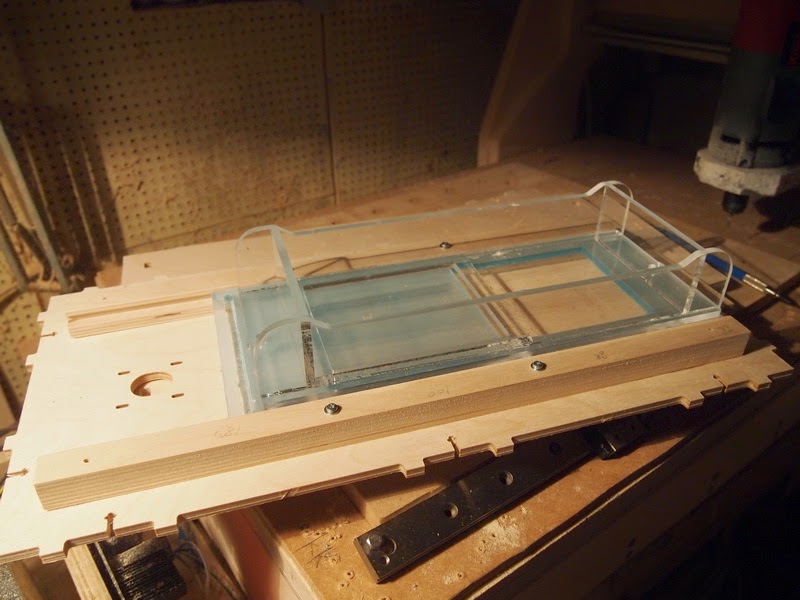 Next is to assemble the panels and make bottom half where projector will be mounted. Again I wan't a bigger cnc...

niels
I have made miniatures since around 2000 and was awarded IGMA Artisan in 2006.